Carmageddon: Reincarnation (previously known as Carmageddon 4) is the fourth game in the Carmageddon series. The game was developed by Stainless Games, who also made Carmageddon and Carmageddon II: Carpocalypse Now. Named 'Reincarnation' during its alpha, Beta, and Pre-release variants, the final title was changed to Carmageddon: Max Damage in its final release, which featured several additional maps, vehicles, and mechanics

A financial report in 2003 revealed that Carmageddon 4 was in development. The developers were identified as Visual Sciences, who were also working on Carmageddon TV for the Gizmondo handheld console. The publishers were confirmed as Take-Two Interactive's newly formed subsidiary 2K Games (although the same article named the developers as original Carmageddon publishers SCi). Very little information was released about the game until late 2005, when recently merged publishers SCi and Eidos Interactive put development on hold for unspecified reasons. The game was subsequently assumed to have been canned, as no new information or press releases surfaced since that time, and Eidos moved on to focus on other projects.

In 2011, after buying back the rights to the series from then-current copyright holders Square Enix Europe, original Carmageddon developers Stainless Games revealed that a new Carmageddon game was in early pre-production stages. Since then numerous concept artworks and early in-game test screens have been released on the official site. The game is planned to be released through digital distribution.[1]

On 8 May 2012 it was announced on the official website that Carmageddon: Reincarnation would be funded through Kickstarter, with a promised release in February 2013 via Steam,[2] although it's still unavailable for the majority of backers. Stainless Games aimed to raise over $400,000 (£250,000) via Kickstarter in order to produce the game. People who pledged more than $1000 for the project would have the chance to be featured in the game.[3] The $400,000 target was reached in 10 days, when it was announced that if the project raised $600,000 then Mac and Linux versions would also be produced. This new target was met by the campaign's end on 6 June 2012 - with a total of $625,143 raised.

Stainless sent emails to Kickstarter backers with updates on development, with the same content later posted publicly on the official Carmageddon website. On 20 December 2012, Stainless Games mailed their backers with news that they were expanding their scope on the game, but it would take "the best part of 2013" to accommodate these changes, pushing back the release date.[4]

On 20 March 2013, news was released that the game would receive an additional investment of $3.5 million from Bullfrog founder Les Edgar in order to develop the game for next-gen consoles.[5]

On 31 December 2013, Stainless Games released a new blog on the official site which included a video demonstrating the vehicle suspension being used in the game.[7]

On 28 February 2014, Stainless Games released news regarding the Damage Technology used in the game. The post also contains a video which demonstrates the power of destruction of the vehicles (flat tires, broken off pieces, twisting/bending of chassis). From 27 March 2014 it was possible to get Early Access to the game via Steam. Whoever pledged $25 or more during the Kickstarter campaign was able to get the Early Pre-Alpha from 13 March 2014.[8]

On 30 January 2015, Stainless Games announced that the public beta would be available from 14 February, dubbed the "Valentine's Day Massacre".[9]

On 26 August 2015, Stainless Games released the first post-launch update that improved the optimisation of the game and fixed most of the bugs in the game.

On 29 October 2015, the second post-launch update, dubbed "Sexing It Up", was released. This update further optimised the game with the introduction of new graphics, and also fixed most of the bugs in many gameplay aspects and implemented balances to the multiplayer games. The update also includes full support for Steam Machine and its peripherals.

On 22 December 2015, the third post-launch update, dubbed "Santa's Bulging Fun Sack", was released. This update improved the vehicle damage system by adding the ability of the vehicles to bend or twist when hit by a mortar or a mine, and also made balances to the multiplayer games. The update also added two new vehicles to the game: the Shredlight and Blitzkrieger.

On 23rd May 2011, Carmageddon.com was revived. It displayed nothing but three skull & crossbones (Max Damages head tattoo) and a countdown timer in the style of the first game's menus. A Twitter account also appeared in the name of Max Damage.[12]

The countdown ended on June 1st 2011 at 9am GMT, to reveal the new website and Reincarnation's announcement.

A number of rewards are being offered for pledging certain amounts, ranging from copies of the game, beta access and exclusive merchandise, all the way up to invites to an exclusive staff party (including flights if necessary) and appearing in-game as an opponent.

The large amount of press coverage (ranging from RockPaperShotgun to BBC News[13]), as well as the contribution and subsequent announcement of some popular fans, led to the 30 day campaign generating roughly 10% of the required $400,000 in just 3 hours. The goal was reached with 10 days to go. The campaign ended on June 7th at 4AM BST, the total raised being $625,143.

New concept art is periodically revealed on the official website's Blog. The first piece of art released featured The Eagle, The Plow, The Twister and The Annihilator in an Industrial environment. The Eagle is using the Opponent repulsificator.[14]. Further art shows Screwie Lewie, Val Hella, and ideas for the new Eagle and environments. There has also been an early gameplay video released, showing the Tez Lane Eagle plowing through human pedestrians.

Nobby explained that the overall idea is to make a game very reminiscent of the first two Carmageddon games (the original especially), but with higher definition graphics. The videos released during the Kickstarter campaign back this up, judging from the driving physics, ragdoll physics, smoke particle effects and pedestrian animations currently in place.

Stainless aim to keep the open city environments, making them even bigger and more detailed than before. There will not be destructible terrain, but there will still be breakable physics objects such as lampposts and glass windows. Arrow signs will return.

The new game will feature the return of a number of the original characters, drawn primarily from Carmageddon, with the possibilty of characters from The Splat Pack and Carmageddon II appearing in DLC packs. There will also be a number of new characters. Returning racers announced include Max Damage, Screwie Lewie, Val Hella and Heinz Faust. A new character named The Terrible Twin has been revealed. Three new characters, currently under wraps, have been based on and designed by the three Kickstarter backers who pledged $10,000 each. The Cops will also return, with the original Squad Car and Suppressor joined by a weaker vehicle called the CU:NT.

During the Kickstarter campaign, a new picture of Max was posted on the official website's banner, to be the main image and cover art for the game. This new design of Max has a mostly natural skin colour (a return to his Carma design, and not the red hue of his design in Carma2 and beyond) and a cybernetic arm. 3 skulls are still tattooed on his head.

Max currently has 2 cars: The design shown in early footage, created by Tez Lane, will be unlockable as an alternate model for Kickstarter backers who pledged $50 or more. The Eagle R, the "official" Eagle, was revealed in the damage tech video released shortly before the Early Access Pre-Alpha.

While so far the vehicles have remained similar to the originals (with modern tweaks), Stainless have played with the fact that you couldn't see the competitor's full bodies in the original mugshots - this meant that they could give the characters some little quirky features that were never shown in their original portraits.[15]

Screwie Lewie's legs have been amputated, so when he needs to get around, he's lifted from The Twister into a monster-truck-wheelchair called the Spack Chariot. This second vehicle may be drivable in bonus levels.[16]. Val Hella has gained a sexier look, and is accompanied by her dog, Hellhound, at almost all times. Heinz wears over-sized breeches, using tank-track rollerskates when out of his car. Max Damage now has a cybernetic arm, presumably as result of the accident that casued Screwie Lewie to lose his legs.

Stainless promised that there would be be a competition to design a new character and their car for inclusion in the game. This appeared as a high-level reward in the Kickstarter campaign: Three exceedingly wealthy Kickstarter backers each pledged $10,000 or more to become in-game opponents, complete with vehicles and backstories!

Three carmageddon.com blog posts revealed their identities, chronicled their visits to the Stainless offices, and teased the vehicles they got to design: Ken from Cancun[17], Roman from Moscow[18], and Ryan from Tampa.[19]

Kickstarter Update 16 sets out bonuses for hitting further pledge targets, one of which is having Nobby and Patrick appear as PratCam movies for Pitbull and Vlad. The final gameplay clip in the initial Kickstarter pitch video shows Tim Schafer being ran over by the Big Dump, suggesting its return (although the Towmeister was later announced). The initial concept sketches include Don Dumpster and Mother Trucker, while a montage of art in a Kickstarter video includes The Bear. The Squad Car and Suppressor were re-introduced, along with a new "mini-cop": Stella Stunna's Electric Blue was mentioned as near completion in the same post.[20]

Val Hella and Hellhound with Cleaver 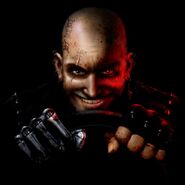 Concept art for the remake of Industrial Injury 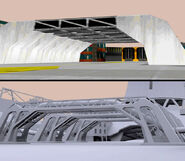 Comparison between arches in Carmageddon and Carmageddon: Reincarnation

Concept art for the police vehicles

The Eagle R in the Early Access Pre- Alpha