Carmageddon TV was a game that was meant to be released for the PC, PlayStation 2[1] and Xbox platforms. Its existence discovered through a copyright application, the game was to be published by SCi, and developed by Visual Science. Unfortunately, a fall out between Visual Science and SCi would damage their relationship, cancelling the game.

It was originally thought that Carmageddon TV was the same as Carmageddon (Gizmondo), although that was revealed false when in 2012, a post by Games That Werent detailed the entire game's concept.

A financial report in 2003 revealed that Carmageddon 4 was in development. The developers were revealed to be Visual Science and the publishers were confirmed as SCi[2].

Little to no news was released about the game until spring 2005, when publishers SCi put development on hold for unspecified reasons[3]. The game had been canned, as no new press releases or information have surfaced since its postponement, and Eidos PLC moved on to focus on other projects.

The only information on the game before 2012 was very scarce, and most of it was fan speculation in forums[4].

"Visual Science updates the violent granddaddy of videogames with CarmageddonTV for the console market. CarmageddonTV will feature more outrageous ways to kill innocent bystanders than the world has ever seen, and a wicked sense of humor that will slice its way through the red noise of the current glut of mindlessly violent videogames. Focusing vehicular combat and the mowing down of pedestrians into tightly designed events, all in the service of eliminating opponents and clearing an area of human life. Cars can be upgraded in-game with temporary weapon pickups or powerups for more effective kills, as well as customized with body modifications, colors, and decal sets to make that killing even more stylish. A wide selection of theme music makes the deadly shenanigans all the more cheerful. The game is as unapologetically satirical and critical as it is violent. If it’s wrong, we probably think it’s right for obliteration on CarmageddonTV. And if it’s right, we see nothing wrong in destroying that, too!"

"Set in the not-so-distant future, society has been numbed by cushy, head-in-the-sand living. There’s no black and white, only a dulling grey as news veers toward entertainment, and reality programming no longer hides its fiction. CarmageddonTV splash blood red on it all: the Atkins diet is this year’s oat bran; the selfhelp industry only helps themselves to your money; vegetarians who eat meat on “special” occasions aren’t actually vegetarians. It’s all bollocks! as our neighbors across the pond say.

They can strike at any time, do anything, like the guys in Jackass, only they are much, much more deadly in New York during a Parade, beneath the mountains majesty of the west’s national parks at the height of tourist season, opening night at a posh film festival. Anywhere. Any time. Anything. Behind murmur of the crowd, motors are heard racing. The sound grows. Then the cars appear. CarmageddonTV has begun a TV show that ambushes public events, cars racing around, performing stunts, mowing down spectators, all for broadcast on a pirate television broadcast that cuts into network programs. CTV has no sacred cows, and if they did, they’d be shish kebab along with the rest. It’s subversive, anarchistic, murderous and gets very high ratings. CarmageddonTV wakes people up. In an overstimulated world, the only thrill is the kill. Dying is the only way to live. And people want to see that. The government and the networks want to shut it down, because if the people pay attention to that kind of carnage, they might notice other things happening in the world.

The people who bring you CarmageddonTV say: “Get a life, or someone will take it from you. And it might as well be us!”

Only one piece of media was officially released besides the title and demo - Mark Knight was a Sound Designer at Visual Science, and he released a short teaser trailer at the end of 2008. The trailer does not show any gameplay, just the SCi games logo, and it cannot be confirmed if it was created during the game's development.

The game was going to feature 16 distinct vehicles to play as. These are all the known ones that were planned for Carmageddon TV (some of the names might be wrong and may need further research).

The game was going to feature 8 environments in total, each of them being separated in a group-like fassion, similar to Carmageddon: Total Destruction Racing 2000.

Only a few characters are known to have existed.

The Humvee at "Amused to Death".

Truck mowing down peds inside a hospital. 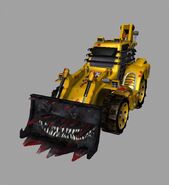