Hollowood is the first location in Carmageddon: TDR 2000.

The level is set inside an amusement park. It is split into distinct sections, which are numbered on the map:

There are also a couple of small fast food joints (Satan's Salami and Fish & Chimps) and some storage buildings. Many peds are dressed accordingly, as Stuntmen, Indians, Zombies or Chimpanzees.

The police vehicle for this location is Killa Kart. 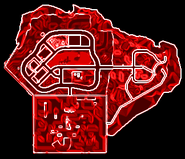 Map from the alpha version
Community content is available under CC-BY-SA unless otherwise noted.
Advertisement